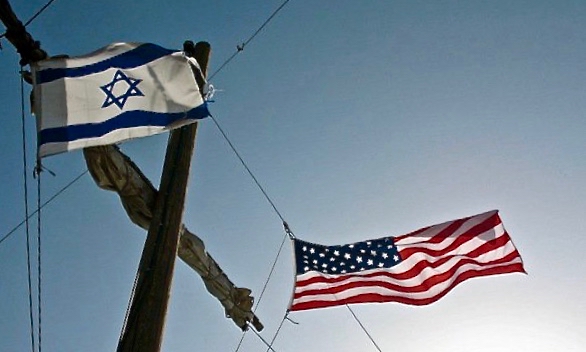 On June 8, 1967, five days after the start of the Six-Day War, and just hours before Israel launched its offensive to take Syria’s Golan Heights, the U.S.S. Liberty, a U.S. Navy “technical research” vessel, i.e., an NSA (National Security Administration) “electronic spook ship,” was stationed in international waters about 30 miles northwest of Arish, the largest Egyptian city on the Sinai Peninsula. She had the very distinctive U.S. Navy warship markings and was flying a large 5′ x 8′ stars and stripes American flag.

Commander James M. Ennis, the Liberty’s Electronic Materials Officer, was on the bridge that morning. He recalls that at about 9:00 a.m., a twin-engine Noratlas surveillance plane, a veritable “flying boxcar,” overflew the Liberty several times, followed a few minutes later by two Mirage III fighters that France had been selling to Israel.

Minutes later the fighters returned and assaulted the Liberty with 30-mm cannons and rockets, followed by two French-made Dassault Mystères with napalm bombs – off target, luckily – and more cannon fire. One hour later, three torpedo boats launched five torpedoes, one hit the Liberty leaving a 40′ x 40′ hole in its hull and killing 26 NSA technicians and linguists working below the waterline, and then raked it with cannon and machine gun fire.

Ennis and other surviving Liberty crew members testified that the attacking planes and torpedo boats were unmarked, without any insignia identifying them as Israeli, and that the Mirage pilots first targeted the Liberty’s communication equipment, preventing it from transmitting a distress signal to the U.S. 6th Fleet until one quick-thinking sailor duct-taped an antenna to the bridge.

The torpedo boats then deliberately shot up and sank three life rafts that the the Liberty’s commanding officer, Captain William L. McGonagle, had ordered into the water after the very first attack.

When it was all over – the attacks spanned two hours start to finish, as long as Japan’s attack on Pearl Harbor – 34 U.S. sailors were dead and 171 were wounded, a 70%, casualty rate, the worst attack on an U.S. Navy ship since World War II. Incredibly, the Liberty stayed afloat and managed to limp into Malta for repairs. Citations for the Liberty’s crew included a Medal of Honor, two Navy Crosses, 11 Silver Stars and more than 200 Purple Hearts.

During the attack, the Israeli pilots jammed all five of the Liberty’s emergency channels – which they knew were used by U.S., not Egyptian, military – but one SOS got through. Navy fighters were launched from the America and the Saratoga, two U.S. carriers only 40 minutes flying time away, but were quickly recalled on orders from Defense Secretary Robert McNamara.

J.Q. “Tony” Hart, then a chief petty officer assigned to a U.S. Navy relay station in Morocco, told the Chicago Tribute in 2007 that he listened in on McNamara’s call, and that in ordering the carrier pilots to stand down, McNamara stated, “President Johnson is not going to go to war or embarrass an American ally over a few sailors.”

In fact, U.S. Navy and intelligence services had quickly identified the planes and torpedo boats as Israeli. The U.S. lodged formal protests and demanded an explanation. The Israelis first claimed that they had asked the Pentagon to identify any U.S. ships in the area and were told there were none, and then that the Liberty was not flying its flag and did not respond to calls to identify itself. After pleading in the alternative, the Israelis apologized, claiming that in the “fog of war” they had mistaken the Liberty for an Egyptian ship, the El Quiser.

President Lyndon Johnson was skeptical, but under pressure from American Jewish leaders accepted the Israeli story. Money and politics. And a U.S. Naval Court of Inquiry, in a cursory investigation that focused mainly on how the crew of the Liberty responded during the attack, not on the perpetrators, concluded that the attack was a case of “mistaken identity” caused by “gross negligence, . . . not malice.”

It was a whitewash, and almost no one in Washington was buying it. In a cable to Avraham Harman, Israel’s Ambassador to the U.S., Secretary of State Dean Rusk said, “At the time of the attack, the USS Liberty was flying the American flag and its identification was clearly marked  in large white letters on its hull . . . readily visible from the air. . . . There is every reason to believe that the Liberty was identified, at least its nationality determined, approximately one hour before the attack.”

The Liberty was an electronic surveillance ship, bristling with large antennas and radar dishes; the El Quiser was a 1920’s-era horse carrier, half the Liberty’s length and one-quarter her displacement, that had been parked and rusting away for years at an Alexandria dock.

Admiral Thomas H. Moorer, then Chief of Naval Operations, told the Washington Post that the Liberty was “the ugliest, strangest looking ship in the U.S. Navy, . . . crawling with antennas, it looked like a lobster, . . . ,“ and for the Israelis “to suggest that they could not identify [it] is . . . ridiculous . . . [like not being able] to tell the difference between the White House and the Washington monument . . . Israel knew perfectly well the ship was American.”

Liberty crew members testified that when the Mirage fighters first overflew the Liberty, they were close enough, 200′ off the deck, for sunbathing sailors to wave to the pilots and for them to wave back, And that after the Liberty’s flag was shredded by cannon fire, the crew replaced it with a much larger 13′ American flag.

U.S. intelligence analysts, now retired, working in three different NSA listening posts around the world, say that within hours after the attack they read transcripts of intercepted communications confirming that the Israelis knew they were attacking a U.S. naval vessel.

Air Force Capt. Richard Block, commanding an intelligence unit on Crete, recalls that in the transcripts he read, “way beyond Top Secret,” the Israeli pilots asked the ground controller, “This is an American ship. Do you still want us to attack?” The response? “Yes, follow orders.”

In 2007, Oliver Kirby, NSA Deputy Director in 1967 told  the Chicago Tribune that he had personally read the transcripts, including this exchange: One of the Israeli pilots said, “We’ve got him in the zero [in the sights],” and then another asked, “Can you see the flag?” Answer: “Yes, it’s U.S, it’s U.S.” Kirby: “They said it several times, so there wasn’t any doubt in anybody’s mind that they knew it.”

Lt. Commander Ennes published a book, Attack on the Liberty, in 2007 and told a Tribune reporter that a few months after it came out, he got a call from Evan Toni, a retired IDF pilot. Toni told Ellis that he was the pilot of the first Israeli Mirage to overfly the Liberty and immediately recognized as a U.S. Navy vessel. When he radioed Israeli air command for instructions, he was ordered to “attack.” Toni claims he refused, and immediately upon landing back at Ashrod air base was arrested for disobeying orders.

Interviewed in 1983, Admiral Moorer said: “I’ve never seen a President – I don’t care who he is – stand up to them [the Israelis]. It just boggles the mind. . . . If the American people understood what a grip those people have on our government, they would rise up in arms.”

But what motives did Israel have for attacking the Liberty and trying to sink her? There are two.

The first and most likely is that Israel did not want the U.S. to know that it was planning to attack Syria and invade the Golan Heights just hours before a cease fire was to take effect. Lyndon Johnson was on the record saying that the U.S. would oppose any attempt by the Israelis to take the Golan from Syria. If the U.S. had known in advance of the attack plan, Israel would have come under intense White House pressure to call it off.

The second is that Israel wanted the U.S. to think that the Liberty had been attacked by Egyptian or Syrian planes, so that it would retaliate, bringing the Americans into the conflict on the Israeli side.

In fact, Ron Grantski, a technician with top-secret crypto clearance on the Liberty, now in his ’70’s and retired in Modesto, California, told the Modesto Bee in 2017 that he intercepted a message that “the Israelis were going to attack a [U.S.] base and blame it on the Arabs.” Grantski said the message was forwarded to the White House, but recalls ruefully, “[I didn’t know] it was our ship they were going to attack.” In 1982, Grantski returned from the first reunion of the U.S.S. Liberty Veterans Association to hear this message on his answering machine: “You better stop talking about the Liberty and Israel. Something will happen to you.”

Not the first or last time Israel used a “false flag” ploy to try to provoke a response from a major power. In 1954, concerned that Nasser might soon direct his rapidly modernizing military against Israel, the Mossad (Israeli equivalent of CIA) recruited Egyptian Jews to plant bombs in American and British-owned civilian facilities in Egypt, e.g., libraries, cinemas, etc., putting the blame on the Muslim Brotherhood and communists, to induce Great Britain to keep its troops  in the Suez Canal zone as a buffer between Egypt and Israel. But the operation was botched and the would-be bombers arrested and jailed, two were executed.

This became known as the “Lavon Affair,” because it forced the resignation of Israeli Defense Minister Pinhas Lavon. Publicly, Israel denied any involvement – refers to it today only as “that unfortunate business” – but in 2005 Israel honored the three surviving bombers with IDF military ranks for “their service to Israel.”

In a documentary, Cover Up: Attack on the U.S. Liberty, aired August 2001 on the History Channel, six survivors, including Lt. Commander Ennes, recounted that, when their ship arrived in Malta after the attack, they were divided into small groups, debriefed and instructed, “You are never, repeat, never to discuss this with anyone, not even your wives . . . if you do, you will be court-martialed . . . and end your lives in prison – or worse.” Now why would Navy brass give that kind of order to men who had just lost 34 of their shipmates?

The Commission found that, in attacking the Liberty, “Israel had committed acts of murder against American servicemen and an act of war against the United States.” Ward Boston, USN (Ret.), chief counsel to the Navy’s 1967 Court of Inquiry, told the Commission in a sworn affidavit that the Court “believed with certainty that this attack . . . was a deliberate effort to sink an American ship and kill the entire crew.”

During the proceedings, Adm. Isaac C. Kidd, who presided over the Court, frequently referred to the Israelis as “murderous bastards.” But Lyndon Johnson and Secretary of Defense Robert McNamara instructed Kidd to issue findings that the attack was a case of “mistaken identity.” The Independent Commission called it “a cover-up without precedent in American naval history.” On October 7, 2004, John Conyers, Jr. (D. Mich.) read the Commission’s findings into the Congressional Record.

Postscript: George Ball, Undersecretary of State and U.S. Ambassador to the United Nations in the Kennedy and Johnson administrations, wrote later: “The ultimate lesson of the Liberty attack had far more import for Israel than the U.S., [because] Israel’s leaders concluded that . . . if America’s leaders did not have the courage to punish Israel for the murder of American citizens, . . . then their American friends would let them get away with almost anything.”