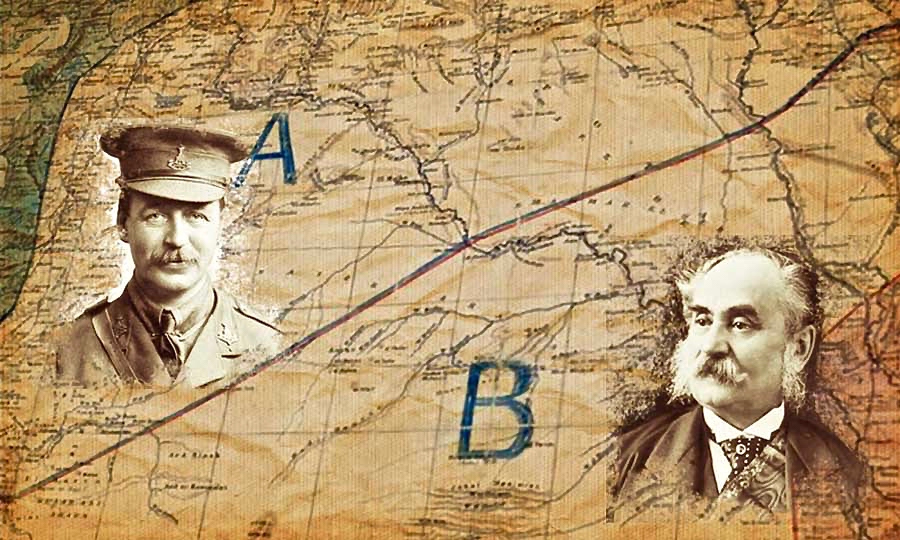 Even before World War 1 was over, two colonial administrators, Mark Sykes for Great Britain and François Georges-Picot for France, aristocrats both, carved up the defunct Ottoman Empire into colonial spheres of influence based on lines drawn quite literally in the sand, Jordan, Palestine and Iraq for Great Britain, Syria and Lebanon for France.

Sykes and Picot did all this dicing and slicing in secret, breaking the promises of self-determination the British made to the Arabs during World War I to encourage an “Arab revolt” against the Ottomans, who had unwisely aligned with the Axis Powers.

And they loved straight lines. Sykes once told the British Prime Minister, David Lloyd George, “I should like to draw a line from the “e” in Acre to the last “k” in Kirkuk,” resulting in borders that ignored ethnic, religious and tribal divisions and long-established Sunni, Shi’a, Kurd and Christian communities on the ground.

Ninety years later, in a video entitled End of Sykes-Picot, the Islamic State of Iraq and the Levant (ISIL) warned, “This is not the last border we will break.”

The U.S., in the person of President Woodrow Wilson, opposed Sykes-Picot. In the Fourteen Points program he laid out at Versailles, Wilson declared that all nationalities should have “an absolutely unmolested opportunity of autonomous development.”

Wilson believed in “covenants openly arrived at,” and that “the settlement of every question . . . [of] territory or sovereignty, . . . of economics or politics, should be based on the [desires] of the people concerned, . .. and not on the material interest of any other nation,” very simply, the same principles of transparency and self-determination that we have always claimed for ourselves. Indeed, Americans were then viewed throughout the Arab world as good people, untainted by the duplicity and greed associated with Europeans.

First, short-term U.N. mandates leading to Arab self-determination, i.e., democracy and self-rule. Second, as for the creation of a Jewish state, they said, “It cannot be accomplished without the gravest trespass on the civil and religious rights of existing non-Jewish communities in Palestine.”

But Britain and France dug in their heels, and Wilson, very ill and undercut by isolationists in the Republican-controlled Senate, caved. On top of imposing a draconian settlement on Germany and planting the seeds for fascism and World War II, they went ahead with Sykes-Picot, fancy-wrapped with a bow on top in the 1922 Treaty of Sèvres.

As for Palestine, Lord Balfour, the British Foreign Secretary, sniffed dismissively: “We [will] not even go through the form of consulting the . . . permanent inhabitants of the country. . . . Zionism, right or wrong, good or bad, is rooted in age-old traditions . . . of far profounder import than the . . . 700,000 Arabs who now inhabit that ancient land,” planting the seeds for the Israel – Palestinian conflict now into its 11th decade.

1932: Huge reservoirs of oil are discovered in the Saudi Arabia, Kuwait, Iraq and Iran. The U.S. State Department called it “one of the greatest material prizes in history,” and Winston Churchill proclaimed, “Fortune brought us a prize from fairyland beyond our wildest dreams.” American and British oil companies, French too, immediately began vying for drilling concessions.

But they also took time to discuss Middle East oil. Roosevelt proposed a simple formula for carving up the oil fields, “Persian oil is yours, we share Iraq and Kuwait, Saudi oil is ours.” So much for Wilsonian principles. In 1944, Great Britain and the U.S. signed the Anglo-American Petroleum Agreement confirming their pact to divvy up other countries’ oil.

The National Security Act of 1947 established the CIA, giving it the authority to carry out covert operations “against hostile foreign states or groups or in support of friendly foreign states or groups but which are so planned and conducted that any U.S. government responsibility for them is not evident to unauthorized persons and that if uncovered the U.S. Government can plausibly disclaim any responsibility for them.” A blank check and no transparency. What could possibly go wrong?