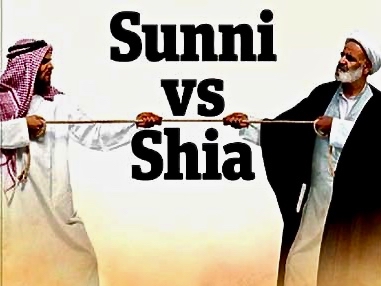 Westerners who tend to hyperfocus on Islam in the Arab world likely do not know that only 20% of all Muslims live in the Middle East and North Africa. Indonesia has the largest Muslim population in the world, and there are substantial Muslim populations in Malaysia, southern Thailand, India, Pakistan and sub-Saharan Africa, e.g., Nigeria, Senegal, Mali and Chad, the vast majority of them Sunni.

In the Middle East, Sunni and Shi’a are not evenly distributed: Iran is almost 100% Shi’a, Iraq, Bahrain, Lebanon and Azerbaijan are 50% – 75%, and there are significant Shi’a minorities, but only 10% – 20%, in Saudi Arabia, Syria, Turkey, Pakistan and Afghanistan, where Sunnis are in the clear majority. All of these countries are between 93% and 99% Muslim, except Lebanon (60%) and Bahrain (70%).

Despite their differences, grievances and animosities, Sunnis and Shi’a have much in common, starting with the Five Pillars of Islam: (i) Shahadah, the core declaration of faith, “There is no God but God, and Muhammad is his Messenger; (ii) Salat, ritual prayer five times a day (Shi’a have only three official prayer times); (iii) Zakat, giving alms to the poor, customarily 2.5% of a family’s income; (iv) Sawm, fasting from sun up to sun down during the holy month of Ramadan; and (v) Hajj, the obligation to make a pilgrimage to Mecca at least once in a lifetime if the believer has the means to do so. And for both Sunni and Shi’a, the bedrock of faith is Mohammad and his sayings as recorded in the Qur’an.

But interpreting the Qur’an, and who does the interpreting, is where Sunnis and Shi’a diverge, just as Catholics and Protestants do on the Bible.

Sunnis, essentially a catch-all term for all non-Shi’a, are very diverse. As the “people of the tradition and community,” Ahl al-Sunnah wa’l-Jamaa’ah, their starting point is the Qur’an and the hadrith, literally, “narratives,” the teachings, deeds and sayings attributed to Muhammad and his followers, passed down orally for more than 100 years after his death and then gathered in written collections in the 8th and 9th centuries. They are the basis of Sharia, Islamic law

However, Sunni religious scholars, ulama, have substantial latitude on how much weight to give to one narrative or another, depending on how they assess the reliability of the narration chain and the trustworthiness of one narrator or another, and there are four distinct major schools of Sunni jurisprudence.

Sunnis historically have differentiated between political and religious leadership, a separation, up to a point, of church and state, varying from place to place and evolving over time.

But fundamentalist Sunnis, e.g., the Saudi-based Wahhabis, under the guise of purifying and restoring “true Islam,” have rejected traditional scholarship and practices, and seek to impose their interpretation of the Qur’an and Sharia into every corner of civil society.

Shi’a, on the other hand, believe that God is revealed through divinely inspired Imams, guided by secret texts, first the Four Rightly Guided Caliphs, including Ali ibn Abu Talib, followed by the 12 Imams, the last of whom is believed to have disappeared in 872 A.D.  and will return with Christ as the Mahdi, a Messiah, to rid the world of evil. Sunnis use the term imam only for the men who lead prayers or preach in mosques.

In the meantime – what could be a very long meantime – Shi’a are guided by ayatollahs, from the root ayatu Allah, or sign of Allah. Although we associate “ayatollah” with the Tehran-based political rulers of Iran, the Ayatollahs Khomeini, Khamenei, etc., in fact there are now almost 70 ayatollahs – otherwise known as maraji, i.e., sources of emulation – around the world, not just in Iran and the holy cities of Iraq, but also in Saudi Arabia, Bahrain, Pakistan, India, even the U.K. and Australia, and there have been a handful of women with equivalent religious rank.

The 1979 Islamic Revolution in Iran was a game-changer, and not just, or even mainly, because Iranians took over our embassy and held 66 U.S. diplomats hostage, 52 of them for 444 days. For many Americans it may be hard to grasp, but, no, it is not always just about us.

Rather, the Ayatollah Khomeini asserted that to safeguard and implement Islam as Allah intended, it is imperative to substitute Islamic government for secular institutions. And he decided, “I might as well be in charge,” freezing out dissenting clerics.

Case in point: Khomeini put Hossein Ali Montazeri, the leading architect of the 1979 Revolution, under house arrest for more than six years.

Needless to say, the Iranian Revolution made Sunnis, especially in Saudi Arabia, Bahrain, Qatar and other Gulf states, with their significant Shi’a minorities, very nervous. Like savvy politicians everywhere, when in danger of being outflanked on the right, they moved further right, fueling the revival of Wahhabism and its literal, word for word reading of the Koran, effectively turning the clock back 1400 years.

Wahhabis from Saudi Arabia and other gulf states, floating on oceans of oil money, built and nurtured hundreds of fundamentalist schools, madrasas, in Pakistan, Afghanistan, India and the  former Soviet “stans” along Russia’s southern border, even in the U.S. and Europe, unleashing violent true believers on “infidels” everywhere.

This seismic shift in the Middle East was exacerbated, putting it mildly, by the 2003 U.S. invasion of Iraq, which resulted in the replacement of Saddam Hussein’s secular Baathist-Sunni government by the Shi’a dominated government of Nouri al-Maliki. Civil war ensued.

We really had no clue how long a chain of dominos we had knocked over. And once the killing started in Iraq – Sunnis setting off bombs in Shi’a marketplaces and Shi’a militia killing Sunni civilians – sectarian lines hardened across the board.

In Syria. President Bashar al-Assad, the leader of the minority (13%) Shi’a Alawite sect – Alawi means “follower of Ali” – brutally suppressed the 2011 Arab Spring protests of the predominately (65%) Sunni population, galvanizing a mail order catalog of military opposition groups ranging from the Free Syrian Army, the “good guys,” relatively speaking, to the Islamic Front, backed by the Saudis, and last but not least ISIL, the Islamic State of Iraq and the Levant, hell bent on creating a new caliphate and imposing, with no limits on cruelty, its even more extremist views not just in Syria, but all over the world.

True to form, Iran and Hezbollah, its Shi’a proxy in Lebanon, backed Assad to the hilt, and Sunni-dominated countries, Libya, Egypt, Jordan, Qatar, the United Arab Emirates and Turkey, along with Saudi Arabia, lined up with money and guns for the Islamic Front.

The decade-long conflict has been catastrophic. The U.N. estimates that 220,000 people have been killed, four million Syrians are homeless, and one million refugees have streamed into Europe. Aleppo, a World Heritage site, parts of which date to back to the 12th century, has been reduced to rubble, along with many other Syrian cities.

A similar Iran-Saudi proxy war erupted in Yemen, with Iran funding and arming the Shi’a Houthi tribes and Saudi bombing and shelling Houthi forces in support of the Sunni government of Abd Rabbuh Mansur Hadi.

And when killing starts, justification soon follows. Although Sunnis and Shi’a share the same core beliefs, and for the most part have coexisted peacefully for hundreds of years, 14% of Iraqi Sunnis now believe that Shi’a are not even true Muslims, and that number rises to 41% in Tunisia, 43% in Jordan, 53% in Egypt. Pew Research, The World’s Muslims: Unity and Diversity, 2012.

But it was not always like that. J.R. “Juan” Cole, Fulbright-Hays Fellow and former Director of the Center for Middle Eastern and North African Studies at the University of Michigan:

“I see a lot of pundits and politicians saying that Sunnis and Shiites in Iraq have been fighting for a millennium. We need better history than that. The Shiite tribes of the south probably only converted to Shiism in the past 200 years. Sunni – Shiite riots per se were rare in 20th century Iraq. Sunnis and Shiites cooperated in the 1920 rebellion against the British. If you read the newspapers in the 1950s and 1960s, there are stories about peasant – landlord struggles and communists versus Ba’athists, but you don’t see anything about Sunni – Shiite riots. The kind of sectarian fighting we’re seeing now in Iraq is new in its scale and ferocity, and it was the Americans who unleashed it.”

Leslie Hazleton: After the Prophet: The Epic Story of the Shia-Sunni Split in Islam (2009)